English Translation: Aoiueuitine is the Vastine word for 'Abomination.' Aoiueuitine is also known by the code names "Experiment LXXIV" and "Sternritter P- The Prototype".


Race: Aoiueuitine was abandonned by Shinigami due to unnatural nature but found solace in joining the Quincy.


Gender: Aoiueuitine is female in mind and body.


Date of Birth: May Sixth of 1917 is Aoiueuitine's day of creation.


Appearance Age: As her body does not resemble the other Species, its hard to estimate Aoiueuitine's age based on appearance.


Actual Age: Aoiueuitine is one hundred and one years old, approximately.


Organization and Rank: Aoiueuitine holds the title of Sternritter P- The Prototype.


Height: Unlike Angels born naturally or artificially since, Aoiueuitine is incredibly small. She stands at only fourteen inches tall from antenna to toes, with wings not much larger than one would expect.


Weight: Due to her incredibly small size and heritage, Aoiueuitine weighs only six pounds.


Hair color: While her hair is predominately black, it morphs into a colorful membrane, not dissimilar to her wings. This membrane is surrounded by thick black with thinner bio-material in the middle. The thinner bio-material varies from shades of green through purple.


General Appearance: At only fourteen inches tall, the Quincy is among the tiniest of Spiritually aware beings. Her body is a light pink-purple color and appears humanoid with distinct insect-like features. She possesses black carapace on her legs, arms and bust, which is high-lighted with small colorful details. Her black hair morphs into a similarly colored membrane. Her face has a human nose and mouth, but six insect eyes, with a fourth, unusable pair at the highest point. Two butterfly-like wings grow from her shoulders and allow her flight.
On her wrists and ankles are bracelets resembling the Quincy Cross. She wears a standard Sternritter coat with the upper back removed to allow her wings freedom to move.

Redeeming Qualities: Aoiueuitine is incredibly loyal. She pledged her life to the Quincy when Soul Society law would have seen her destroyed.
Aoiueuitine is also very caring and loving to her allies. She puts their wellbeing above her own, and goes out of her way to make them happier..


Negative Qualities: All people have parts of their personality that people just do not like. What are these annoying, or sometimes downright evil, traits? Please use at least two negative traits.


Likes: What does your character like? Please have at least three.


Dislikes: What does your character dislike? Please have at least three.


Personal Habits: Optional. Does your character have any particular habits, whether on the battle-field or off?


Goals: These are both optional.


Short-term Goals: Short-term goals can be completed in less than one to five years.


Long-term Goals: These are goals in excess of five years to achieve.


Something Special: Optional. Something special does not fall into any of the above sections. This would be entirely unique, that sets them apart completely. An example would be unique implants that affect their vision or an extremely sensative sense of smell.


Mekkakyu Appearance: Vergnügen in its most basic form takes the shape of a two bracelets and matching anklets. The jewelry has the same appearance as the most basic Quincy cross, however the  intersection of the five lines is expanded into a ring that she slipped her hands and feet through.


Spirit Weapon Appearance: Vergnügen's Spirit Weapon is a white bow in her right hand and solid blue, jagged arrows in her left hand. Under her feet are small, solid platforms that allow her to create stable footing regardless of where she is.


Spirit Weapon Ability: Other than giving her stable footing even while in midair or on water, Vergnügen has a complicated but minor ability. The arrows fired by Vergnügen are much smaller than typical Quincy arrows, and only cause a minor irritation when they strike a target, much like a mosquito bite. However, these arrows are not designed to kill.
Instead, Vergnügen's power works as such. If Aoiueuitine shoots an enemy, she can then say a single word, that the victim must be able to hear. When Aoiueuitine says the word, the victim then has their memories and all associations with the word replaced with the very next thing they see after being hit.
For example, if Aoiueuitine says 'dog,' and the victim happens to be looking at a tree, they lose all understanding of actual dogs, including the ability to recognize them by sight, sound or touch. All memories of dogs are instead replaced by trees. They also lose understanding of trees, and the victim then believes those trees are dogs. If they had fond memories of playing with dogs, the dogs in their memories are replaced by trees.


Letzt Stil Appearance: Letzt Stil allows a massive boost to a Quincy's ability to absorb spirit particles, and Ekstase is no exception. Ekstase causes the four Quincy Crosses to converge into one weapon, a single bow. With the power of Ekstase, Aoiueuitine can completely rewrite the memories of a single person, in exchange for her powers as a Quincy, and with it, her longevity.


Vollstandig Appearance: Geschichte des Göttlichen reshapes Aoiueutine's body. Her wings become feathery, akin to the Vastine Amorte's, and her body grows in size to a Human's in proportion. However, her jaw elongates, taking on a canine snout as fur grows from her body, shedding its insect scales and gaining the musculature of a Werewolf, with the great feathery wings of the Vastine Amorte. She still possesses six insect eyes, however. Above her head, five jagged shards of light form a halo.


Vollstandig Ability: Firstly, Geschichte des Göttlichen remakes Aoiueutine's body into a true Angel, the perfect hybrid of Werewolf and Vastine Amorte. She loses any benefits being an Angel, and instead has half the physical power of a Werewolf and half the spiritual energy of a Vastine Amorte. Furthermore, the power of her Vergnügen, allowing her to change a person's ideas and memories with just an touch or shot, able to shoot her feathers as arrows, as well as cut with her claws.

History: Cover everything. If your character has lived hundreds of years, we expect hundreds of years of history. If it is mentioned in the above sections, describe it in the history of how it came to be.


Major Events Timeline: Here will be a brief timeline of major events in your characters life. This is to make is easier to locate said events and place you in the site's own timeline. Events to consider are: birth, death, promotion, race change, unlocking your ability and second ability, or any other significant, person events in your character's life.


Roleplaying Sample: Optional. Must be used for any position of authority or high rank. It must be done for the character you are applying for. 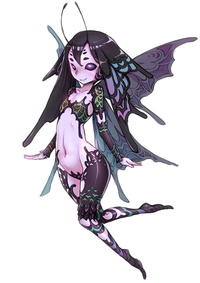