The Basics
Name: Catherine Hohlebaum
English Translation: Her last name translates to "Hollow Tree"
Species: She is Human.
Race: Quincy
Gender: Female, completely.
Date of Birth: Month, day and preferably year of which you were born.
Appearance Age: How old does your character physically look?
Actual Age: How old is your character in reality?
Organization and Rank: She aligns herself with a group of Quincy separate from the main Quincy force.

The Psyche
Redeeming Qualities: These are things about your character's personality that make them better liked or at least appreciated by those around them. All characters should have at least two traits that are positive. Each trait should be a sentance or more long.
Negative Qualities: All people have parts of their personality that people just do not like. What are these annoying, or sometimes downright evil, traits? Please use at least two negative traits.
Likes: What does your character like? Please have at least three.
Dislikes: What does your character dislike? Please have at least three.
Personal Habits: Optional. Does your character have any particular habits, whether on the battle-field or off?
Goals: These are both optional.
Short-term Goals: Short-term goals can be completed in less than one to five years.
Long-term Goals: These are goals in excess of five years to achieve.
General Personality: Describe the character's personality. Are they kind, aggressive, a compulsive liar? Three to five sentences mininum.
Something Special: Optional. Something special does not fall into any of the above sections. This would be entirely unique, that sets them apart completely. An example would be unique implants that affect their vision or an extremely sensative sense of smell.

Schrift Appearance: The physical mark of her Schrift is on her right eye, replacing her iris and pupil with a stylized S that resembles a musical note.
Schrift Ability: Ständchen allows causes her voice to be infused with her spiritual energy. Every time she utters even the smallest of sounds, it is as if she is assaulting everything around her with her power. Of course, its power increases with the volume she intends to use. However, this ability causes her to be unable to make sound without using Ständchen. Those who hear her voice, which carries farther than it should, feel as if the very air is her arrow, and with this Schrift's power, she can eliminate Hollows with but a word. Ständchen's power comes from her being physically branded in such a visible location, as well as being one of the few followers to her master to be given a Schrift in the first place.

Spirit Weapon Appearance: When she chooses to manifest a spiritual weapon, it takes the form of a lyre. The lyre is solid and seems to be made of a fine silvery, glimmering metal.
Spirit Weapon Ability: When she plays the lyre, arrows a manifest from the strings and strike forward. Her weapon as no other special properties.

Vollstandig Name: What is it called?
Vollstandig Appearance: What form does your Vollstandig take? Describe it.
Vollstandig Ability: What ability does this give you or use?

The Past
History: Cover everything. If your character has lived hundreds of years, we expect hundreds of years of history. If it is mentioned in the above sections, describe it in the history of how it came to be.

Major Events Timeline: Here will be a brief timeline of major events in your characters life. This is to make is easier to locate said events and place you in the site's own timeline. Events to consider are: birth, death, promotion, race change, unlocking your ability and second ability, or any other significant, person events in your character's life.

Roleplaying Sample: Optional. Must be used for any position of authority or high rank. It must be done for the character you are applying for. 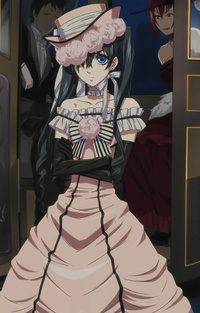