[font color="#9e6d23"][font face="georgia"]Appearance[/font][/font]:Cuervo is a slightly below average man (gonna use this since I rather not type he/she a lot), reaching about five feet and five inches in total. His build, though mostly obscured by his outfit, is lean and built for endurance. Of course, as a hollow, a big part of his outfit, being the mask, is part of his body. His mask covers his entire head, working more like a helmet. The mostly white mask covers the entire skull and leaves no detail to whether it is a man or a woman under there. For 'eyes' it has a side ways razor thin black visor. He wears a special outfit, unique to him and him alone. First his body seems to be covered in a black silk like material, with his upper torso having a white light armor piece with a [a href="https://i.imgur.com/pktBBXj.jpg?1"]strange design[/a]. On his hands, he wears silver gauntlets, and guards that go up to just below his elbows of the same color. On his lower half he wears a black thick belt which holds a red cloth over the front of his body, with white robes on the sides. Over it all he wears a hooded mantel, with white outsides and black insides, obscuring even more of him.

[font color="#9e6d23"][font face="georgia"]Ability Name:[/font][/font] The Sacrifice
[font color="#9e6d23"][font face="georgia"]Ability:[/font][/font]The Law of Equivalent Exchange, an eye for an eye, you cann't get something for nothing, there are many names for this but it comes down to the same thing: taking one thing and gaining another. The best part is nothing is lost in this. For example, normally the death of a hollow would cause an imbalance in souls, but this doesn't actually kill the hollow's soul, just take it and altering it. Through this, Cuervo can turn lead to gold, take a hollow and some sand and make a hollow made of sand, or turn a rock sidewalk into spikes of rock. This also requires a large amount of intelligence, so his intelligence stat starts at master (this of course forces him to have that stat to use it). Should he be 'killed' but not want to truly die, he can sacrifice the life of another in order to bring himself to life, and while unable to be killed when resurrected, he himself does not have the power to fight back, and as such must retreat and fight another day. He can even sacrifice some of the millions of hollows inside him to do this. He however cannot do this to his whole being (such as turning into sand to dodge an attack or something like that) as he needs to be able to finish the Sacrifice. He can however do it to parts of him.

[div align="center"][font color="#9e6d23"][font face="georgia"][font size="28"]The
//
P A S T[/font][/font][/font][/div]
[font color="#9e6d23"][font face="georgia"]History:[/font][/font]Cuervo has no memory of his life as a human, or even his time as hollow before he gained control of his Gillian body. He remembers that he could at one point, but chose to forget it as it took up space in his brain. At some point he became a Gillian, and rose to control the body. He began to thirst for other hollows and as continued to each more and more of them. With each consumption his intellect grew, and his size shrunk. Soon he would grow to be curious of the world around him, soaking up information from anything he could. At one point he ran into a shinigami who tried to kill him, but the shinigami found himself outclassed. Rather than consume it instantly like it did many before, it instead interrogated him. He learned everything he could about the Shinigami, and even about things called Vizards. Having gotten enough information, he consumed it too, before moving on. He would eventually find one of each race, interrogating them and then consuming them, slowly gaining more and more knowledge of the world around him.

Eventually he came very close to the form that he is known for now, although his outfit was less detailed, more or less just a baggy white cloak. During this time he saw many many different abilities that he could only describe as 'spell casting'. All races but Hollow seemed to be able to do it, while Hollow were limited to just Bala and Cero. He began to plot how to use negative reishi to mimic it. It would take years and many many experiments on many many species but it would prove to be worth it when he succeeded.

At one point another hollow would come across him, and, unknown to him, stalked him for a while. After three months he was invited to see the Hollow King. When arriving he was greeted by the Hollow King, who had a bit of a party to lighten his mood. Cuervo however wanted the king to get to it, as such jumped right to why he was called here. He would be told he wanted him to be part of his Hollow Army. Seeing this as an opportunity to grow stronger and study more, as well as have more test subjects, Cuervo agreed. Afterwards he was given a gift, several hollows to consume. Cuervo accepted and consumed so many that he became a Vasto Lorde, looking exactly as he does now.

At some point he created two Hollows from two assistants. These were Suna and Hunter. Suna was the hollow of sand. His job was the guard Cuervo from all attacks when in Hueco Mundo. Hunter on the other hand was more complex. He was built to kill assassinate targets. More specifically, to assassinate souls in of the dead whenever a hollow died. As such he was given a long range speciality in combat as well as a stealth skill stronger than even captains of the Stealth Force. He is normally deployed through a Garganta, he then uses several throwable weapons given to him by Cuervo to basically snipe the spirits before closing the Garganta and returning. Other wise no other major events have happened to Cuervo...yet. Lets see whats in store. Perhaps some more things to learn?

[font color="#9e6d23"][font face="georgia"]RolePlaying Sample:[/font][/font]» Kagaku traveled with the group, though he was slightly behind the rest. Not because he was slow, heck he was the lightest person there, but he was a bit side tracked. He was collecting various plant samples as they went along, be it close to the ground or in the trees. Sure he could pay for them later but it was much cheaper to just grab some and put them in jars. Luckily for him his extremely light body and above average normal strength allowed him to keep up with the others, or at least Shoumen.

Kagaku, tho his face didn't show it, was very excited. Not only is he getting multiple samples of plants were indigenous to this region, but he'd finally get to see the Hideaki hijutsu in action. He had always been curious about their strange ink based abilities. Shoumen also had more tatoos than the average Hideaki, which made him all the more interesting.

Unlike many other scientist, Kagaku had no interest in the Nibi Jinchuuriki. He had seen multiple in his decades of living. He knew of their speed, fire, and cat like attitude. Kagaku had learned all the data he was capable of learning without cutting one open, and none of them were willing so it didn't matter to him.

Kagaku had his familiar's with him on this mission, well the fast ones at least. Do to the environment, that meant everyone but Tsuchi. Esper, Eve, and Raiden had all split up to look for ingredients. Raiden checking the trees, while Esper and Even stayed together and covered a wider area on the ground with Kagaku. Nami was checking under water for ingredients, as well as keeping an eye out for predators. Each had their own way to avoid damage. Both Raiden and Esper could sense what was going on around them, and Raiden and Eve could out run anything there on land. Nami of course had the advantage of her camouflage and natural speed in the water. Esper could likely outrun most animals and those that could outrun her would be beaten by her nimbleness and human intelligence. Kagaku had nothing to worry about.

When they arrived at the bog, Kagaku watched the jinchuuriki show off. The look on his face showed he couldn't be less interested. He turned towards Shoumen to finally speak through out this journey. "You go next, I still have to gather ingredients." He said, before picking up some flowers and placing them in jars. He would go last, and likely the easiest way: riding on the back of Nami. True it was hard but for barely any chakra at all he could be glued to her back while she swam him across the bog. Of course he would wait until Shoumen was across, at which point the rest of his familiars would arrive. Eve would hop on Kagaku's shoulder and ride with him, while Raiden would get just stay in a near by tree. Esper would hop along the longs and rocks with her cat like body, making it across without so much as a drop of water on her.

This problem is very easy to fix yourself. The most likely cause of this problem is an improper code. Make sure all codes are closed properly, and spelled correct. All color codes should say "color=#" followed by whatever color you desire.
_________________

Alright, I think I know the cause for this. It appears you're using an outdated template. The codes on the old Race templates are unstable and prone to breaking. As a result, we ask that all applications use the Master Template. However, if you create your own template from scratch or another forum, you may use that. But many older templates will break their coding once applied to newer forums, like Damnation's recent updates. 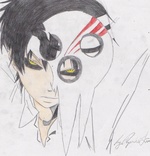